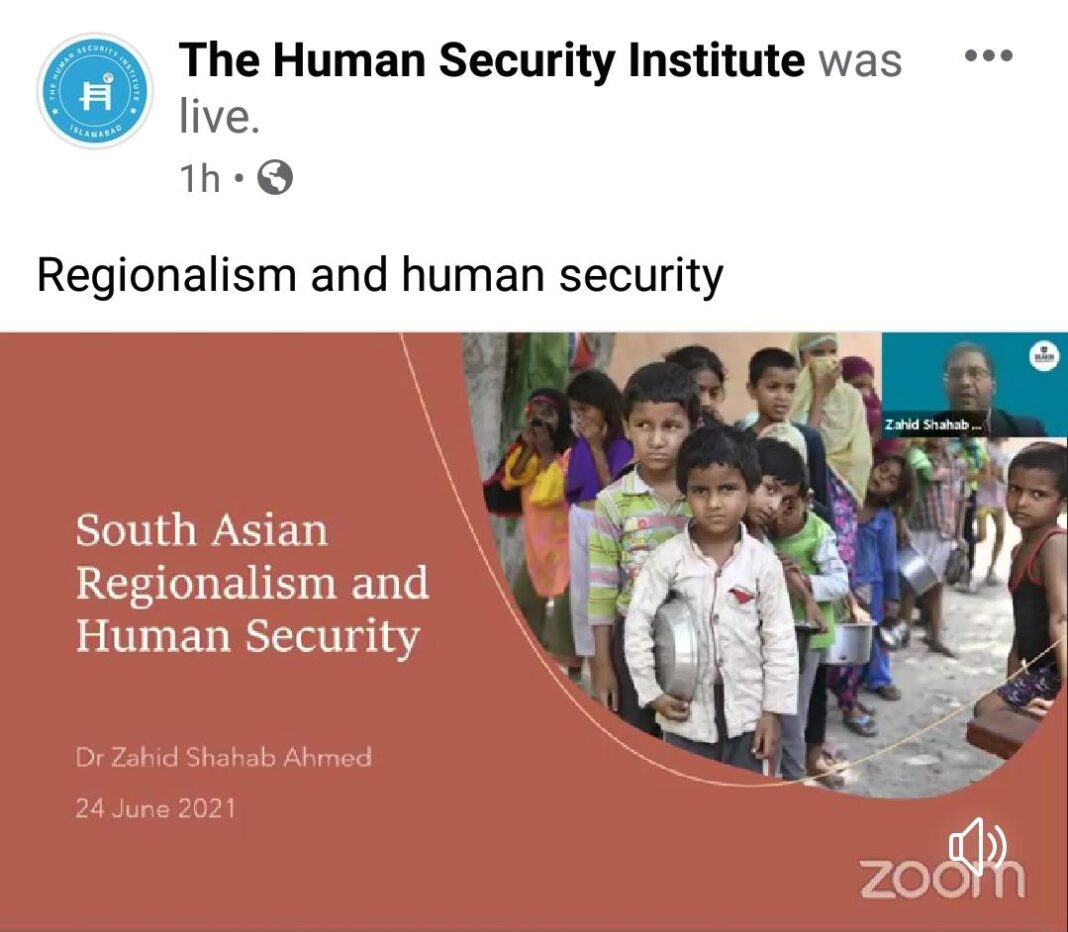 Minutes of the 11th lecture of Lecture Series on “Exploring the Dimensions of Human Security”.

Topic of the Lecture: South Asian Regionalism and Human Security

Regionalism in South Asia has never been a priority of the South Asian countries. The experiment of regionalism has not been successful in South Asia, as the countries in the region had other aims and objectives. There has been no uniformity of interests in the region, two of the biggest states of South Asia for example have been found at the opposite poles when the regionalism was developing in many parts of the world. The region has always been a hot bed of conflicts, due to the long-standing border disputes and a deepening animosity between the nations due to their shared problematic colonial history. India was a part of non-alignment movement whereas Pakistan was busy in pioneering OIC and ECO.

The establishment of SAARC has been attributed to the rise in regionalism. but South Asian regionalism has not been a priority of the south Asian nations. Hence, SAARC was not as successful as compared to the other regional organisations, such as ASEEAN.

SAARC is a late comer to regionalism. The establishment of SAARC has been attributed to the Zia-ur-Rehman of Bangladesh who lobbied for a regional organization for the people of South Asia and SAARC was established in 1985. Its secretariat is located in Kathmandu, Nepal. The latest member is Afghanistan who joined in 2007. Observer states include Australia, China, the EU, Iran, Japan, Mauritius, Myanmar, South Korea and the USA.

There are many human security challenges in South Asian region, the most important of them are:

South Asia has one fifth of the entire global population. such a huge population comes with its merits and demerits. There are a lot of human security challenges in the South Asian region, and it is important for the South Asian states to cooperate with each other to resolve these problems. These problems include:

The biggest hurdle that lies in SAARC’s way is the rivalry between India and Pakistan. Both countries are trying to dominate the organization. Another inter member conflict is between Pakistan and Afghanistan. So, there are a lot of interstate conflicts that are to be resolved in order to make progress in the regional integration.

Given India’s rising profile and its strong relations with other SAARC members, such as Afghanistan, Bangladesh, and Bhutan, Islamabad has made steady efforts to balance this by getting China on board. Pakistan wants China to get a full membership, it might not happen because of India’s opposition.

Overall, SAARC has largely remained an overly underperforming regional organisation mainly due to the Indo-Pak rivalry. Due to inter-member fissures, the organization has only been able to organize 18 summits in its nearly 35 years of existence.

Political tensions in the Region and SAARC:

Inter-state relations continue to deteriorate. We have seen this particularly in the case of Pakistan’s relations with India and Afghanistan, and India’s relations with Pakistan and recently with Bangladesh and Nepal. This shows the intensity of trust deficit that naturally poses challenges to South Asian regionalism. There is also a lack of political will to cooperate in certain areas, such as energy cooperation.

Continuity with a greater focus on human security can bring together the countries. In the present circumstances, SDF could divert its attention to issues such as food security, livelihood, poverty alleviation and health. SAARC countries needs to make human security as their primary focus. The organization is still far behind in terms of becoming more effective in conflict resolution or becoming a supra-national organization. SAARC ultimately is what its members want it to be – they do not want it to be a supranational organization.

Dr Zahid Shahab Ahmed is a Research Fellow at Alfred Deakin Institute for Citizenship and Globalization, Deakin University. Born in Rawalpindi, Pakistan, Dr Ahmed is an expert on peace and security in South Asia. During 2017-19, he was a non-resident research fellow with the University of Southern California’s Center on Public Diplomacy. Prior to joining Deakin University in April 2016, he was Assistant Professor at the Centre for International Peace and Stability, National University of Sciences and Technology, Pakistan. He has extensive experience carrying out fieldwork in South Asia, in particular Pakistan. He is the author of Regionalism and Regional Security in South Asia: The Role of SAARC (Abingdon: Routledge, 2013). His work has been published in reputable international journals, such as Civil Wars, Middle East Policy, Asian Studies Review, Third World Quarterly, and Territory, Politics, Governance. He is fluent in English, Punjabi and Urdu.