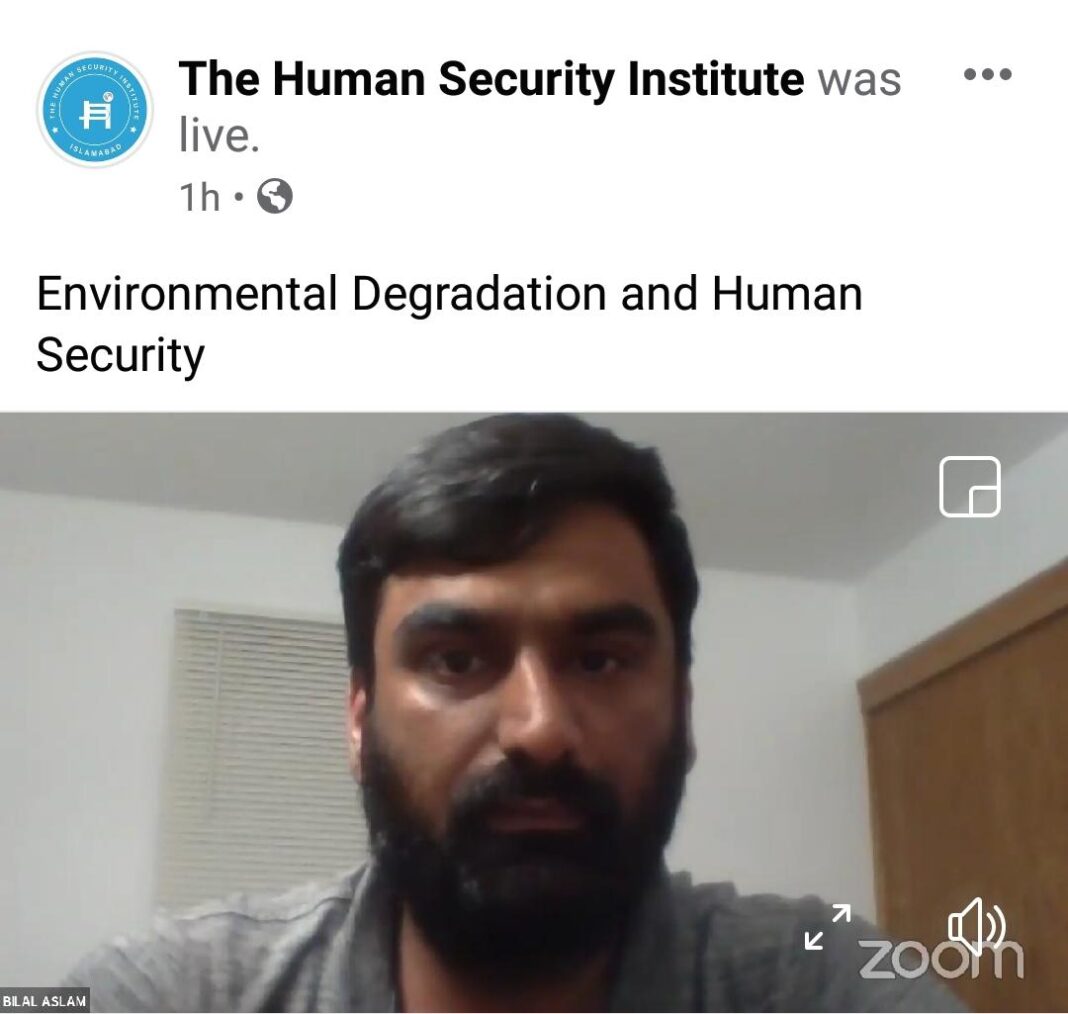 Minutes of the 12th lecture of Lecture Series on “Exploring the Dimensions of Human Security”.

Topic of the Lecture: Environmental Degradation and Human Security in Pakistan

Environmental security is one of the primary components of human security that determines the wellbeing of a people. Environmental degradation is a non-traditional security threat, and it has got a lot of attention in recent years. Sadly, environment is decline in Pakistan, and indicators are not showing a positive image for Pakistan. Pakistan has paid a heavy cost for environmental degradation as in 2016, it was estimated at around 25.1 billion USD. There has been a rapid population growth, rapid industrialization, urbanization, and a poor management of natural resources that have contributed to the environmental problem of Pakistan. Moreover, a reduction in glaciers in the Hindukush-Himalaya region and water and heat stress is causing more distress to the environment in Pakistan.

Pakistan is facing increased monsoon variability, melting glaciers, and rising temperature that is more than the expected global average for the future, Siltation in dams and an over all climate change is creating the risks of more floods and droughts.

There has been an increase in the climate induced disasters such as heat waves, droughts, floods, and wildfires. Back-to-back floods in the years 2010 and 2011 caused a lot of damage. Similarly, a heat wave in 2015 caused the death of some 2000 citizens in Karachi, when the temperatures were as high as 45 degrees Celsius. All these indicators show a dramatic shift in the climate change and makes Pakistan extremely vulnerable to climate change.

Rapid industrialization and unplanned urbanization have put stress on environment, specifically on the clean water sources. Sewage waste from big urban centers and industrial waste is not properly managed. Hence, it ends up polluting clean water sources. The discharge of industrial waste in form of toxic chemicals, radioactive materials and other solids and liquids is also deteriorating the quality of water adjacent to the industrial areas of Punjab, Sindh and KPK provinces. Agricultural activities such as the use of fertilizers and pesticides, that result in the contamination of water is extremely high. The chemical contamination due to fertilizers and pesticides in the water system of Punjab is way beyond the WHO’s safety limits. A study conducted by UNICEF estimated that the total health cost of the water-related mortality and morbidity stands at PKR 114 billion.

Air pollution is also becoming a huge problem in Pakistan. The industrial emissions, combustion of the municipal waste, emissions from the vehicles, burning of the biomass and fossil fuels contribute to the air pollution in Pakistan. A study conducted by SUPARCO identified that the level of fine particulate matter has exceeded in the large cities of Pakistan including Karachi, Lahore, Islamabad, Peshawar, Rawalpindi, and Quetta by excepted standards. Smog is another environmental problem that causes distress to the people of Pakistan. Smog is caused due to the vehicular emissions and the emissions from burning of coal and furnace oil that generates the pollutants like carbon monoxide, Sulphur dioxide and nitrogen oxide.

Air pollution undermines the health and causes various diseases. The particulate matter aggravates the respiratory and cardiovascular diseases. A study conducted by World Bank on the impact of particulate matter on health in Pakistan showed that it caused deaths of more than 22,000 people annually including 700 children.

Deforestation is a primary concern as only 5pc of the total land in Pakistan covers forests and it is in decline. The forest cover has reduced from 3.59 million hectares to 3.32 million hectares with an average rate of reduction of 27,000 hectares annually. Deforestation in Pakistan impacts the human health and agricultural productivity. The climate experts maintain that the diminishing forests have caused expansion in country’s heat zone and contraction of the Indus delta.

Maintaining a healthy environment and ensuring quality of life by sustaining natural resources must be the focal point of sustainable development strategies. There is a need of a human centric approach towards that focus on ensuring environmental protection and equity in resource distribution. The environmental degradation in Pakistan is one of the major setbacks to the Pakistani economy. Pollution like water pollution, deforestation, degradation of land and air is a major hurdle to the sustainable development in Pakistan. Chemical and organic waste produced by an ever-growing number of industries has been a reason for soil erosion and biodiversity loss. The environmental degradation in Pakistan is a serious issue that has severe implications in terms of the economic loss and the loss of biodiversity and natural habitat. There are both natural and man-made causes of the issue of environmental degradation in Pakistan. The natural causes include the climate change, heat waves and floods while the man-made causes mainly include water pollution, air pollution, deforestation, and the land degradation. Maintaining a healthy environment by ensuring the quality of life should be the fundamental sustainable development goal. Environmental degradation affects the quality of life and puts constraints on the water security, food security and the heath security. Its pertinent to device an effective system to tackle the issues we are facing and include the support from individuals, communities, and social societies on multiple levels.

Bilal Aslam is pursuing PhD in South Asian Studies from the Centre for South Asian Studies, University of the Punjab, Lahore. Currently, He is a visiting research scholar at the Department of Community & Environmental Sociology, University of Wisconsin Madison USA. He has demonstrated history of working in the education sector, development sector and non-profit organizations.