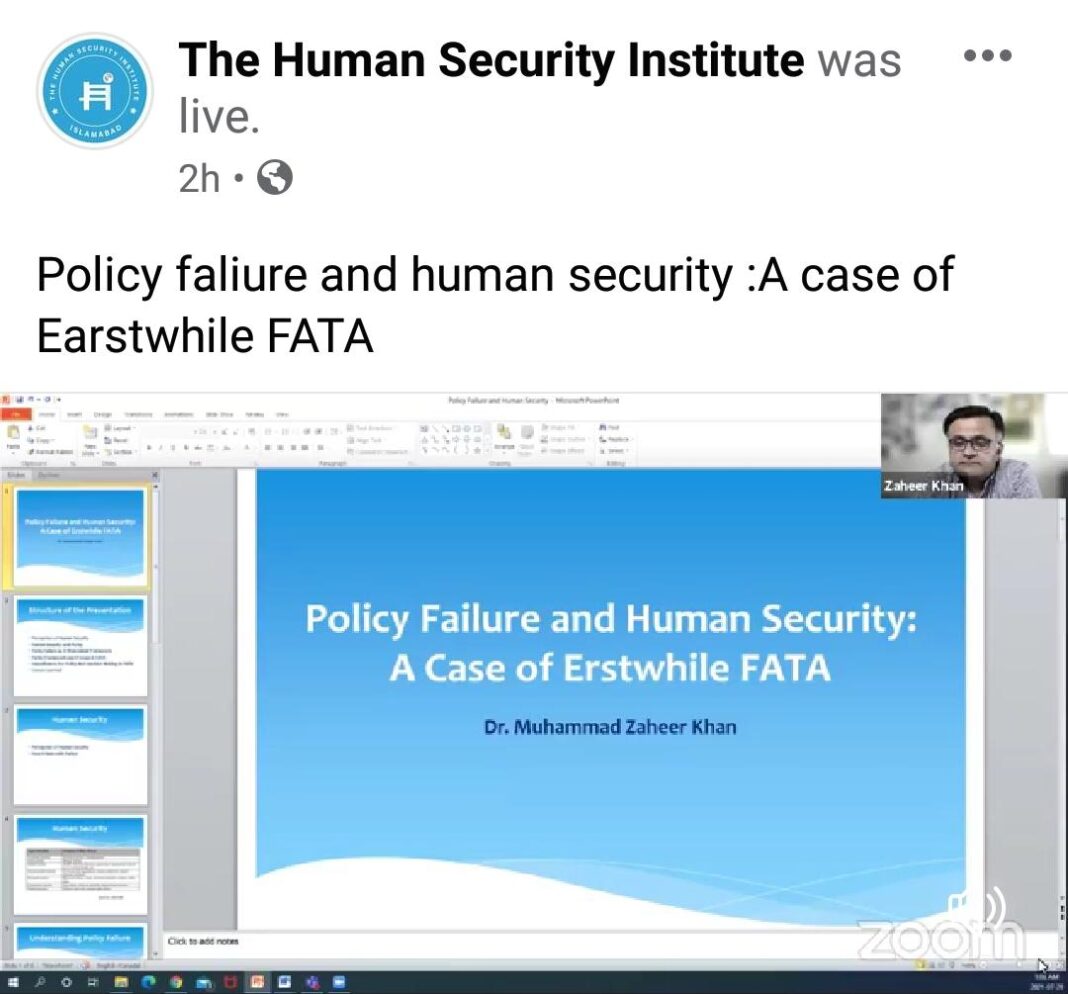 Minutes of the 14th lecture of Lecture Series on “Exploring the Dimensions of Human Security”.

Topic of the Lecture: Policy Failure and Human Security: A Case of Erstwhile FATA

Today world is a place for many people full of threats of many fronts: protected crises, violent conflicts, natural disasters, persistent poverty, epidemics and pandemics. Economic downturns impose hardships and undercut prospects for peace, sustainability and sustainable developments. Such crises are complex in telling multiple forms of human insecurity and when they overlap, we can grow exponential spilling into all aspect of people live destroying entire communities and crossing national borders.

Human security is about fundamentals of people. So, if you look at united nations perspective human security is an approach that assists societies in identifying and addressing widespread and crosscutting challenges to the survival, livelihood, and dignity of their people. This approach is people centered, comprehensive, context specific and prevention-oriented responses that strengthens the protection and empowerment of people. Achieving human security starts with people, their needs, their hopes and their challenges. However, these can vary considerably across communities and people themselves. Achieving human security depends upon empowering people to participate in making informed choices about how they feel most secure. Not only in the immediate future but in the long run as well. Let them be free in making their decisions. This free choice would mean that they have access to norms and institutions that grantees basic fraction of human progress and safety such as good governance, rule of law, early warning mechanism and social protection services. In a nutshell we can say human security is about fundamental freedom. It means using processes that build on people, strengths, aspirations. It means creating political social, environmental, economic. Political and cultural system that together gives people the building blocks of survival, livelihood and dignity.

Policy failure seen as important catalyst in policy development process for policy change. Literature is full of references which helps to understand the domain of policy failure.  Some theorists say policy success or failures are not inherent characters, but these are the labels applied by the observers (McConnel, 2011). Policies usually are taken or understood in a ‘framing context’ between the groups which favor its, the critics, the shapers and the victims (Boin ,2009). Modern literature focuses on all stages of policy process for identifying all possible causes of failures. Studies have discussed six dimensions of failures (Weaver; 1987; Hood et al, 2000; Brandstorm and Kuipers, 2003; Cobb and Primo, 2003; Schudson, 2006; Hood, 2010). These includes extent of failure, duration of failure, visibility of failure, avoid-ability, intensity of failure and intentional failures. There are three sets of Meta variables that affects policy failures (Cobb and Primo, 2003; Schudson, 2006; Hood, 2010). These includes political institutions and their practices, capacity of the governance structure and lack of knowledge in policy process and practices. Technical issue, purely interpretation, can’t be addressed in any significant way. Some of the literature of policy failures refers to as purely technical issue which can be solved, some referred to it as political, administrative and phenomenon unaffected external factors and changes. Some referred to it as purely as interpretation and relativistic construction. It can’t be addressed in any significant way.

The concept of public policy is based on socioeconomic concepts, high economic performance, formal and informal institutions, complex art, inclusive and participatory, interactive process and cooperation of drivers and agents. The policy process in initiates in FATA takes place in four major steps. These are policy initiation, formulation, implementation and evaluation. Several formal and informal activities and actors are involved in each of these steps. Issues are identified at local level but interpreted at very different way at the upper level. Policies are formulated on nonidentified issues. It is very rare if any policy is implemented and it has achieved its intended objectives.

Various formal and informal actors are involved in policy making steps in FATA. Policy idea starts with tribal man, which convey to maliks, PA and governor KPK. These ideas are considered as needs and desires of tribal man.  When needs are identified, policy issues were developed at 2nd stage of policy initiation. This further goes from a comprehensive process of formulation, once policy is formulated it is then sent for implementation.  Formal actors include maliks, bureaucrats, governor KPK and president etc. informal actors includes community leaders, journalists and political parties etc. Most of polices in FATA has failed due to gaps in intended objectives and outcomes. Overall policy evaluation in FATA was inefficient. Drown strikes in FATA affected the socio-economic conditions of tribal mans. More than 3.3 million peoples of FATA became IDPs. Situation in FATA remain fragile. The political system not grown up. The indigenous judicial system remains in bad situation. This was the era of extreme socio-economic distraction. The non-state militant groups flourished. Journalist became victims of these groups. It also affected girl’s education in FATA which was already low. Common man has lost confidence on state institutions in FATA.

The policies adopted in FATA are mostly evolving over time. Before merger of FATA with KPK, number of actors provided recommendations and reports, but they were not implemented effectively.  All these recommendations went in vain with merger decision. There was lack of focus on policy framework. Policy makers use more functional approach in policy making. Cost benefits of policy design should be used. Policies of FATA lacks political will. There was no proper monitoring and evaluation of polices. There was no mechanism for recording the inputs of common man. Evaluation process should be optimized. Undue justifications are given for shortcomings. FATA polices were lacking integrated approach of policy making. Reforms were given many times but failed every time. The way forward could be focus on participatory approach of policy making, emphasis on proper implementation of policies and lastly, proper evaluation of polices in various forms.  Evaluation of policy process can bring positive change.

Dr Muhammad Zaheer Khan is a research and business consultant based in Calgary, Canada. He has worked in the development sector in Pakistan with focus on erstwhile FATA. His research interest includes governance issues, policy analysis, armed non-state actors and conflict resolution.