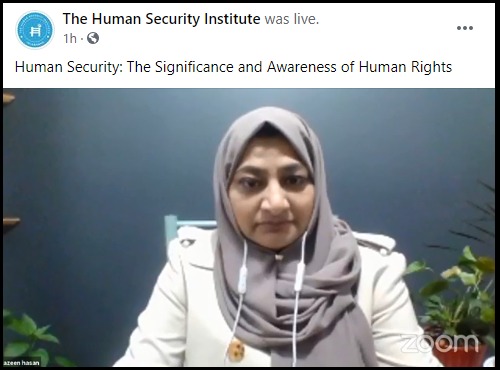 Minutes of the 9th lecture of Lecture Series on “Exploring the Dimensions of Human Security”.

Topic of the Lecture: Human Security: The Significance of International Human Rights Law

Relevance of International Human Rights Law (IHRL) is significant in today’s world. Universal Declaration of Human Rights (UDHR) adopted and proclaimed by the General Assembly (GA) of the United Nations (UN) in December 1948. It is a consensus document signed by all the members of the UN, and it is bases on common vocabulary. The sole aim of this document is to safeguard the rights of the weak nations and communities.

Unfortunately, IHRL is less effective and weak because of the role of investing bodies, weak enforcement mechanisms, and differing interests of countries. These are the main reasons, the HRs are being violated around the globe especially in Palestine, Kashmir, and Uyghur.

Raphael Lemkin coined the word ‘genocide’ in the winter of 1942 and led a movement in the UN to outlaw the crimes, setting his sight on reimagining HRs institutions and humanitarian law after the WWII. As a result, Genocide Convention, famously known as the Convention on the Prevention and Punishment of the Crime of Genocide, was promulgated by 39 signatories on December 9th, 1948. It can be defined as ‘acts committed with the intent to destroy in part or whole a nation, ethnical, racial, or religious groups.’ The Article II of the convention states, “In the present Convention, genocide means any of the following acts committed with intent to destroy, in whole or in part, a national, ethnical, racial or religious group, as such:

(a) Killing members of the group;

(b) Causing serious bodily or mental harm to members of the group;

(c) Deliberately inflicting on the group conditions of life calculated to bring about its physical destruction in whole or in part;

(d) Imposing measures intended to prevent births within the group;

(e) Forcibly transferring children of the group to another group.”

These are the five main points of the Geneva Convention. The article 2(a) discourages genocide and ethnic cleansing, which is practicing in Palestine and China. The article 2 (b) halt bodily or mentality harm to members of the group. And the last part prevents forcibly transferring children of the group to another group, as it was happened in Canada, Spain, China against Uyghur Muslim minority, and Israel against the Arab Jews.

Concept of HRs is relevance to other religions and ideologies. IHRLs are favorable for weaker segment of the society. According to a writer who has said that Israel is the result of diplomacy through which it has deceived the UN. Moreover, weak communities must understand and utilize international laws and diplomacy for their upgradation. Various laws related to HRs have been promulgated and 167 countries signed these laws.

Mrs Tazeen Hassan is a Harvard-educated journalist, independent researcher, and analyst. Currently, she is engaged with Calgary University Canada and a Human rights organization based in Washington.